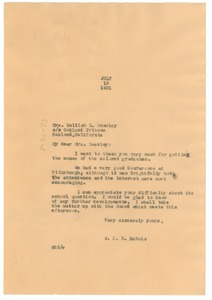 New York (N.Y.) - Thanking her for enclosing (in mums312-b057-i371) a list of recent "colored graduates"; relaying the success of the N.A.A.C.P. Conference in Pittsburgh, "although it was frightfully hot"; and pledging to take up "this school question" -- regarding the issue of segregation, as described in mums312-b057-i368) with the Board later that afternoon.