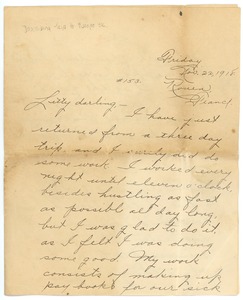 Rouen (France) - Nick has returned from a three day trip paying sick and wounded soldiers at different hospitals. When he returned to Rouen there were two letters from Letty, the first mail he has received since leaving Tours. Nick is now allowed to tell Letty about the places he has been and what he has seen so he gives her a an overview of where he has been since leaving America. After a seven day journey... more