St. Aignan des Noyers (France) - Most of the boys who arrived when Charles did have returned home. When they were fighting, everyone seemed contented, but now they accomplish nothing. When paid, he feels like a Rockefeller and spends most of it at the YMCA; buys hot cakes. 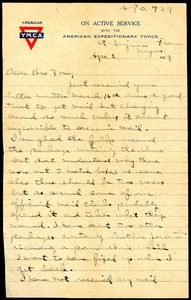 St. Aignan des Noyers (France) - Has not received Mim's letter, but would like to find who it is who takes all mail containing money. Has requested a leave for Paris in April. Still attached to the classification camp and likely will be until he returns home.

St. Aignan des Noyers (France) - Camp has improved some, but in December he saw some of the worst sights he has ever seen. Did not receive the promotion, but has a major pulling for him. Heard Mr. Higgins had inquired after him and says there might be a chance with his daughter "although she is a little fat. Could stand for that so long as there is Bocoo money attached to it. Do you compre Bocoo that means lots, s... more