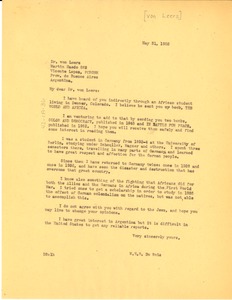 New York (N.Y.) - Sending him and hoping he enjoys "Color and Democracy" and "In Battle for Peace"; describing his experience in Germany and his "great respect and affection for the German people"; noting he disagrees with Leers "with regard to the Jews, and hope you may live to change your opinions." 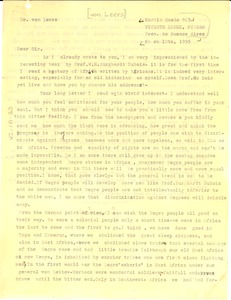 Buenos Aires (Argentina) - Expressing his admiration for W. E. B. Du Bois's "history of Africa written by Africans" and seeking the author's address; empathizing with the letter-writer's feelings suffering and embitterment; anticipating that the "discrimination against Negroes will dwindle away" in the U.S.; wishing "the Negro people all good" from the German perspective; suggesting that his nati... more 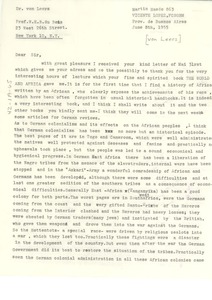 Buenos Aires (Argentina) - Thanking him for his letter (mums312-b144-i265) and thanking him for his books; describing his take on German colonialism "and its effects on the African peoples"; commenting on social relations in that nation; noting his fight against the Jews and describing that people's efforts "to bring war on Germany, to force Germany down and bring out country again under their he... more