END_OF_DOCUMENT_TOKEN_TO_BE_REPLACED

Argentina - Interview between Robert Potash and Enrique Vanoli, with the participation of General Tomás Sánchez Bustamante. Topics include Vanoli’s views on Perón, Onganía, López Rega, Balbín, and Paladino; the dynamics of “La Hora del Pueblo” and the radicals’ participation; and various government relations. The interview was originally recorded on an audiocassette, and it cuts abruptly at a transition point at ... more

Argentina - Interview between Robert Potash and General Angel Solari, covering the period between 1945 and 1951. Topics include his military career, his relationship with Perón, his views on the military mission, Evita as a political figure, and the GOU (United Officers Group). The interview was originally recorded on an audiocassette, and it cuts abruptly at a transition point at 00:31:10 before continuing. 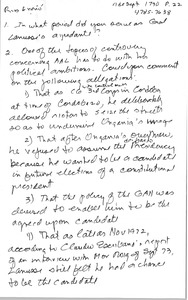 Buenos Aires (Argentina) - Captures General Ríos impressions about Lanusse after working closely with him as his aide from 1966 to 1973. Addresses Onganía's ouster (1970) and Lanusse's presidency (1971-1973) his responsibility for Videla's and Viola's appointment, etc. Focuses on Lanusse's characteristics as a person, a military member and a man of faith. Includes Dr. Potash's post interview notes. 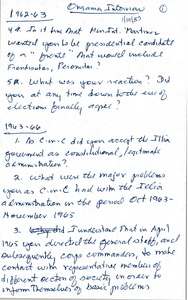 Argentina - General Onganía preferred not to have his interview recorded. After the interview he sent a typed, 15-page, unsigned document to Robert Potash via a third party Salvador San Martin who had been present at the interview and who vouched for the authenticity and origin of the document with his own signature on the bottom of each page. This document provides Onganía's responses to many of the questions r... more 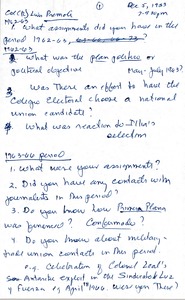 Argentina - Robert Potash's questions, notes and a transcript from an interview with Colonel Luis Premoli covering events from the 1940s to early 1970s. Topics include Premoli's designations in the early 1960s, the "Escuela de las Américas'”, Illia's ouster, the unions, a comparison between the United States and Argentina, Onganía's ouster, and Lanusse's personality and actions. Include input from... more

Argentina - Interview between Robert Potash and Admiral Adolfo Estevez. Topics include his career and personal life; Perón's ouster and the foreign influences in this event; the Navy; the political parties Unión Cívica Radical (UCR) and Unión Cívica Radical Intransigente (UCRI); and the careers of Eduardo Lonardi and Arturo Frondizi. The interview was originally recorded on an audiocassette, and it cuts abrup... more 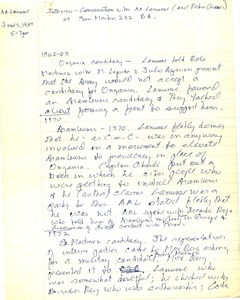 Alejandro A. Lanusse interview with Robert A. Potash

Buenos Aires (Argentina) - Notes from a conversation between Potash and Lanusse focusing on the time period 1962-1973, in particular presidential candidates, Pedro Eugenio Aramburu, and the return to democracy in Argentine in 1983 with the election of Raul Alfonsin. 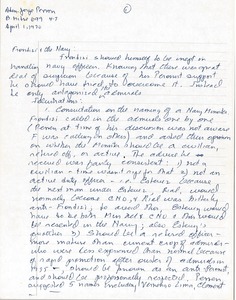 Argentina - Robert Potash's notes from an interview conducted with Admiral Jorge Perren. Topics include Frondizi, the Navy, and the army's attempts to take over the Argentine government.

Argentina - Interview between Robert Potash and Dr. Isidro Ventura Mayoral, who acted as Perón’s attorney on several occasions. Topics include his views about repression, communism, the “Justicialismo,” relations with the United States, Perón’s behavior and his political skills, the General Confederation of Labor of the Argentine Republic (CGT), unions, and political persecution. The interview was originally reco... more 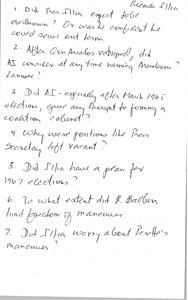