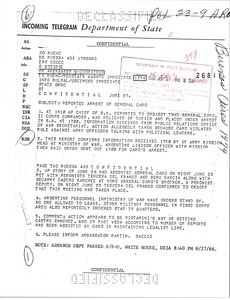 Argentina - Robert Potash's notes and transcript for an interview conducted with Eduardo Castro Sánchez. Primary topics addressed : his political position and role in the "1966 revolution", his role as Secretary of War, Illia's and Onganía's ousters (1970), the military intervention in the politics, and a speech at West Point and the U.S. position towards the situation.