1 results found for: subject:"Discrimination against the mentally ill" 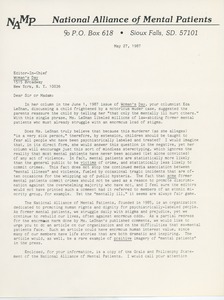 Letter from Judi Chamberlin to Editor of Woman's Day

Sioux Falls (S.D.) - Chamberlin criticizes a column by Eda LeShan suggested parents reassure a child frightened by a murder case by telling her "that only he mentally ill hurt others." Chamberlin points out how this stigmatizes a group of people who are statistically more likely to be victims of crimes rather than commit crimes. As partial redress, she urges the magazine to do an article on the National Alliance of Mental... more