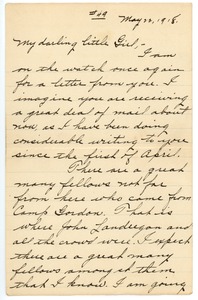 France - Nick has heard that there are many men from Camp Gordon stationed nearby, and he hopes to have a day off to visit them. He is preparing an application for an officer commission. He had not realized how easy it was, and regrets that he didn't apply when he was still in the states since he knows that he is just as capable as the majority of officers he meets. He hasn't been able to sleep well s... more