Letter from Barbara Halpern to friends during time she and Joel M. Halpern spent in Laos with the United States Operations Mission. This letter describes a wide variety of recent events in which the Halperns were involved. Their house in Luang Prabang was considered a field station, and used by visitors as a kind of bed and breakfast, with Barbara as hostess. She begins with describing a ritual called "baci" which was conducted by two "beetle chewing grandmas" in order to wish the Halperns good luck and health, and healing from the Asian flu. The Fourth of July celebrations included many houseguests. She also describes meeting Dr. Thomas Dooley, a doctor working in the northern provinces. There they visited a Thai Dam village and took part in a a festival. Typical Lao food and its preparation is described, as well as the pampering that Barbara received from her housemaid, Le. The sumptuous celebration of the Royal Wedding of Princess Savivanh Savang Manivong is described from the point of view of an American insider. 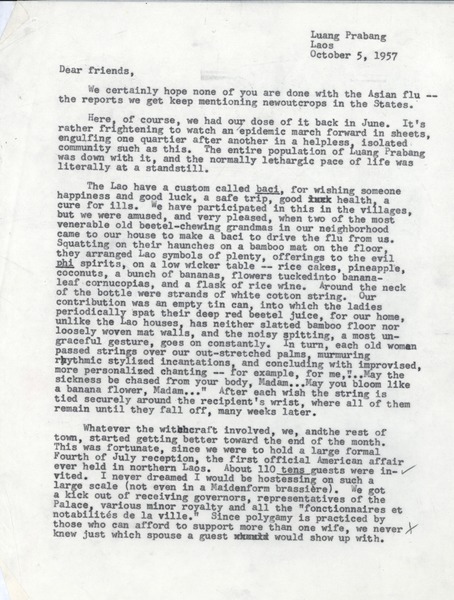