Account of first crossing into Germany within artillery range of Duisburg; stayed in a millionaire's casino near Krefeld, "While we were there the MPs had trouble with the Hitler youth, and lost four of their number by hanging and slit throats at night. Those bastards look very peaceful during the day." Stayed in a former German kaserne with DPs and caught lice; German's let behind equipment and their sick an wounded: "They were there when we got there and the first night we slept on the same post together, each in our own barracks. I tell you the Nazis have really fixed things up for the army men and nothing was spared." Woman cooking for the army messes, some still wearing the uniform of the Nazi Deutsche Jungmaedel: "They work hard, and they try to be pleasant, but I have seen enough to know that as a veneer." Appropriating German houses and ousting the residents, one family willing to leave a dying relative: "absolutely cold-blooded in their reactions. We sure were likewise." Witnessed a V1 and V2 plant tunneled into a hillside: "When I saw that I knew that if Germany had had say six more months before the invasion, England might have been blown off the map... And surrounding all this are almost hundreds of barracks where the slave laborers lived. Among them we passed an underground gas chamber where the Nazis killed the unwilling and the resisting... Today I visited a place where over 5000 of the 'walking dead' were buried..." Long description of Nordhausen camp and people: "Don't ask me to pity a people who lived with thirty thousand cremated slaves in the year and who produce thousands of V1 and V2 and wring their hands and say is this Amerrrika? Never in my whole life have I been so stunned with unbelief, over twenty five moles of underground death weapons factories, and that thousandfold record of inhumanity! Why, those few that survived enough to talk told of how some were denied water so long and made so weak that when they were given a few drops ice cold they died from the shock. Some of the bodies had been whipped and cut. Many alive were locked in with those dead and forced to eat and sleep with them." 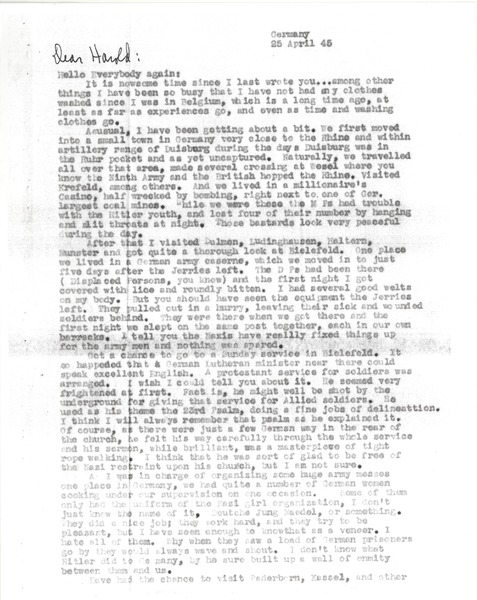