Letter from Joseph Langland to Harold Langland, May 23, 1945

Can now reveal his location. Sights of destruction on passing through Nuremberg, Heidelberg, Mannheim, other cities: "I have heard fellows ride into cities and see the complete wreckage and say, 'Oh Mac, that's beautiful.'" Seeing Nordhausen and Ohrdruf: "it was then that the soldiers as a mass saw and learned to know that all the hideous and unbelievable rumors that had been seeping out of Germany were true... and not unbelievable enough!... all the rest of the concentration camps where Germans by the thousands treated hundreds of thousands of men and women worse than beasts and experimented with their bodies and souls and emotions like rats. Believe that.... Everything I used to hate as great sin, here, as I know with my own eyes and senses, became a matter-of-fact with thousands of people... rape, murder, inhumane tortures, the sacredness of the human body and soul, planned starvation... you must have heard of many methods employed..." Despite the severe destruction, "the German goes about his way. He is industrious, granted.... But what makes me furious always is the great excuse that is rising through all of Germany that the people were not guilty, that they people meant no harm, that the people had no desire to be a master race, that the people did not know of the concentration camps... ;We were not guilty, we were mislead'." Visit to the sanatorium where German girls raised illegitimate babies for the Reich. German industry and character. German ideas of the master race. 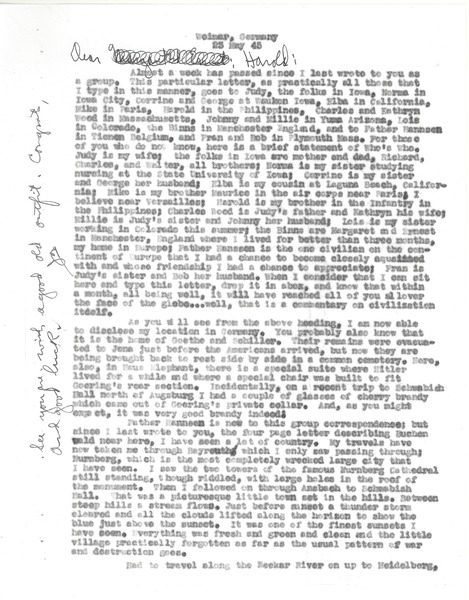