McCormack responds to multiple letters he has received from Noel Morris and Arthur Huxley. He indicates that he would be happy to appear on Australian television in Melbourne and in Perth except for the fact that he might not be in Melbourne at that time. He also discusses potential player interviews and his travel plans for his time in Australia. McCormack requests that Morris enter him in the Australian Open Championship and discusses the type of clubs he would like to use. He also requests that Morris help Jay Michaels with regards to the Gary Player and Wimbledon instructional films when he is in Australia during September. McCormack mentions that Tony Jacklin would be able to visit Australia if he were to receive return airfares for his participation in the Dunlop International and the Wills Masters. He confirms Morris' knowledge that Jacklin has not been selected for the British Canada Cup Team. He notes that he has sent Arthur Huxley's letter of August 1, 1968 to Messrs. Clark, Cole and Townsend and presumes that they will be participating in the tournament preceeding the Australian Open. McCormack provides Morris with some confidential information regarding the reference George Carr made to Arnold Palmer and Dunlop England. He informs Morris that he is having letters typed up for Palmer's signature and that Morris should have them by the end of August. 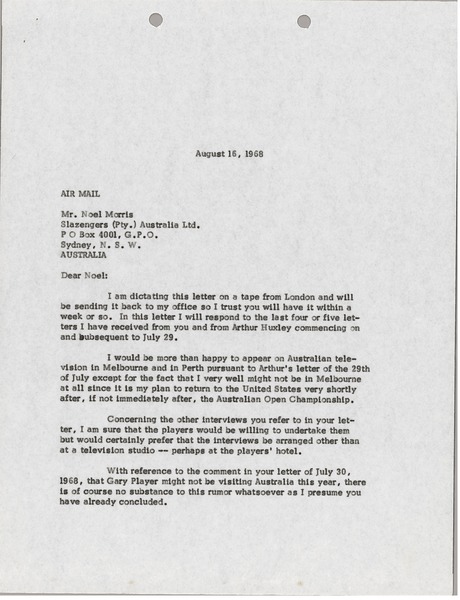